November 12, 2017
Government of the Balochistan, Finance Department has issued Notification regarding Grant of Fixed Daily Allowance to Balochistan Police and Levies Force (Ministerial / Clerical Staff). vide No. FD(R-I)III-6/2017/2125- 2245 dated 30.10.017. Which is written as below;


In partial modification of this Department’s letter of the dated 29-05-2017 addressed to the Accountant General Balochistan wherein fixed daily allowance was not allowed to the Ministerial Staff/Clerical Staff, may be read for Ministerial/Clerical Staff Anti-Corruption Establishment only.

2.            Further to clarify that the Ministerial /Clerical Staff of Balochistan Police & Levies Force are entitled for the referred fixed daily allowance with effect from 1st May 2015. 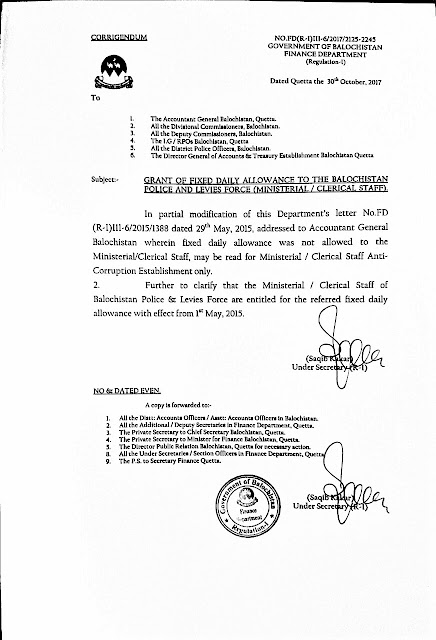