SUMMARY REGARDING UPGRADATION OF THE POSTS OF CONSTABLES, HEAD CONSTABLES AND ASSISTANT SUB INSPECTORS OF POLICE DEPARTMENT OF BALOCHISTAN

November 15, 2017
A  Summary regarding Upgradation of the Posts of Constables, Head Constables and Assistant Sub Inspectors of Police Department of Balochistan has been prepared for the approval of Chief Minister Balochistan and same has been forwarded to Secretary to the Government, Home Department for further necessary action by Inspector General of Police, Quetta Balochistan. The detail of summary is as follows:


Balochistan Police is performing duties round the clock for maintenance of law and order situation enforcement of law and fighting against terrorism. In all these efforts the role of police force is critically important. They not only play a vital role in all these operations but also do not fear to sacrifice their lives in the line of duty. During the current financial year more than 100 officials of Balochistan Police have laid their lives 182 were injured in the line of duty.
2.            It is worth mentioning here that Govt. of Punjab vide Notification No. 16521/F-l dated 03/10/2016 (Annexure-A) has upgraded the post s of Constables. Head Constables and Assistant Sub inspectors to the grades as tabulated below:

3.            In order To boost up the moral of the officials of Balochistan Police Department , it is, requested that the following posts may please be upgraded to the Basis Pay Scales as given below, which is at par with Punjab Police. Financial implication involved in the matter comes to PKRs 290.4 Million per annum detail as (Annexure-B):-

4. The approval of the Hon`ble Chief Minister Balochistan is solicited at Para-3, please.

Copy of the Summary 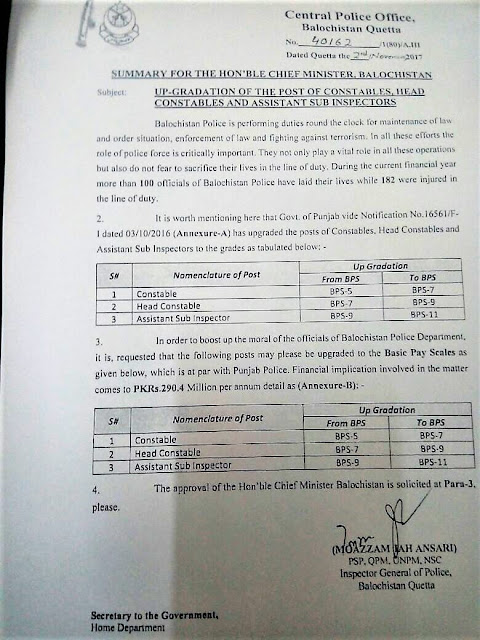