CLARIFICATION / INSTRUCTIONS REGARDING SURRENDERING THE SERVICES OF OFFICERS / OFFICIALS


The letter as written is here under:

I am directed to refer to the subject noted above and to stat that it has been observed by the Competent Authority that the officers / officials posted by the S&GAD are surrendered by the District Coordination Officers concerned and other officers in the Secretariat as well as field on certain grounds including inefficiency and poor performance on their part.

2.     In this regard kind attention is invited towards section 2(k) of Punjab Employees, Efficiency, Discipline and Accountability Act, 2006 which reads as under:-
"2(k)    Inefficiency means failure to :-
(i)  efficiently perform functions assigned to an employee in the discharge of his duties; or
(ii) quality departmental examination in three consecutive attempts."

5.     It is, therefore, requested that the officers / officials who are posted in the ...... and expose themselves to inefficiency may be reported to the competent authority to proceed under the disciplinary law as per laid down procedure instead of surrendering their services.

Copy of the Letter 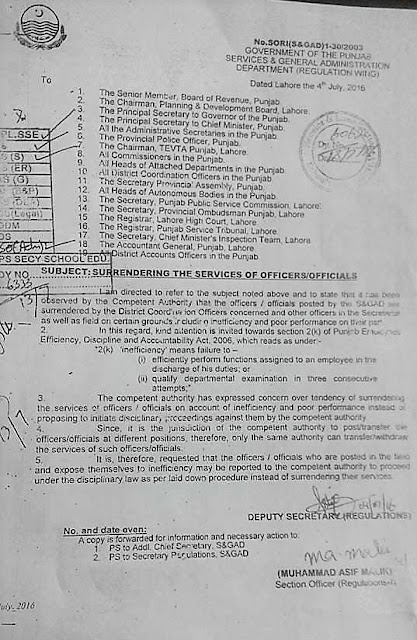