I am directed to refer to the subject noted above and to state that the Provincial Government has decided to observe utmost austerity in usage of public money through prudent financial management, observance of financial discipline, judicious reduction of the expenditures without compromising the essential and core organizational functions / activities. Expenditures shall be required to be realigned with organizational goals to make them target based and cost efficient. Wastage of resource and leakage of funds needs to be curbed strictly.

In order to ensure effective and economical use of public resources, the Provincial Government has decided to introduce the following economy measures during the financial year 2018-19, which shall be applied across the board for all Government Departments, Local Governments, Authorities, Public Sector Companies, Autonomous Bodies, Attached Departments and Special Institutions with immediate effect:

ii. Placement of Funds in Bank Accounts of Entities: Parking of public funds provided by Provincial Government from its budgetary allocation in the commercial back accounts of Companies, Authorities, Autonomous Bodies, etc. shall not be allowed. Finance Department will release funds which are required to be used within the current financial year 2018-19 to such entities in their respective SDAs o through normal release mode. These funds will be further transferred from SDAs by Administrative Department to Commercial Bank Accounts of such entities as per cash flow requirement of entities to avoid unnecessary parking of funds. Moreover, Administrative Secretaries shall ensure the return of unspent amount in such entities to Finance Department through 2nd Statement of Excesses & Surrenders.

iii. Air Travel: There shall be a complete ban on the foreign visits of Ministers, MPAs and Government Officers / Officials through Government funding. The cases for foreign visits shall be placed in the Austerity Committee for its consideration and subsequent approval of the Chief Minister through submission of a summary. The Provincial Ministers and Civil Servants while undertaking official tours shall travel in economy class on domestic flights. For International visits, the ministers / officers shall travel in one class below their entitlement.

iv. Treatment Abroad: There shall be a complete ban on treatment abroad on governments expense.

v. Ban on Purchase of New Vehicles: There shall be a complete ban on procurement of locally assembled new and imported vehicles out of current and development budgets. Under un-avoidable circumstances, vehicles, except listed below, shall be procured with the prior concurrence of Austerity Committee and subsequent approval of Chief Minister through submission of the summary;

vi. Ban on Purchase of Durable Goods: Generators and Air Conditioners shall not be allowed to be procured except with the prior concurrence of the Austerity Committee. However, the generator required for Sewage disposed & water supply schemes / tube wells will be exempted from the ban.

viii. Contingent Paid Staff: The Contingent Paid Staff can be hired only in extremely emergent cases according to powers specified in delegation of Financial Powers Rules, 2016. However, the departments shall remain within the budgetary allocations for the purpose under object head "A01277-Contingent Paid Staff" and no re-appropriation shall be allowed / made and no additional funds as supplementary grant shall be provided for this head during financial year 2018-19.

ix. Ban on Upgradation of Posts: There shall be a complete ban on all types upgradation of posts except powers delegated under Delegation of Financial Powers Rules, 2016.

Strict compliance of the aforesaid austerity measures shall be ensured by all concerned.

The above instructions / guidelines supersede the ones earlier issued on this subject vide this Departments letter No.FD.SO(GOODS)44-4/2016 dated 16.10.2017. 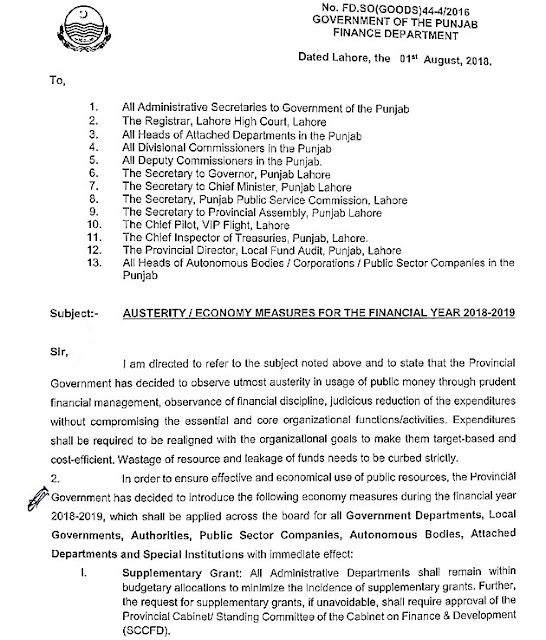 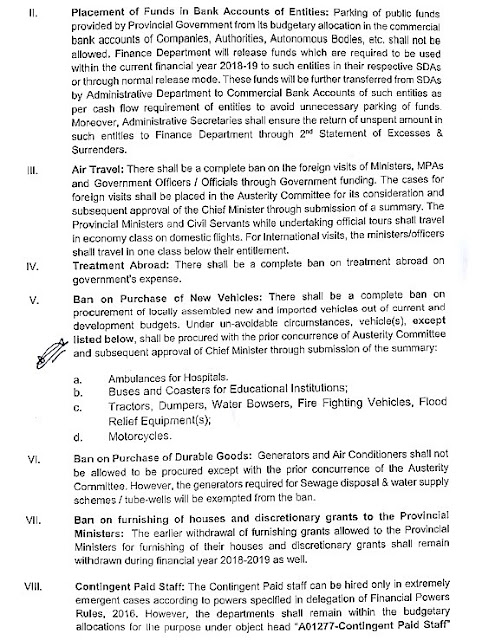 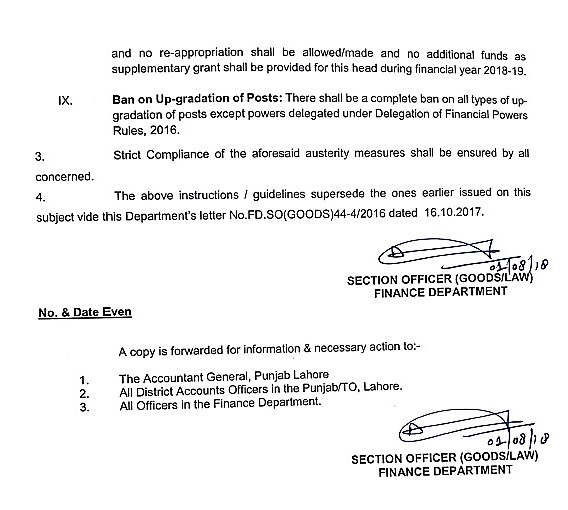