CLARIFICATION ABOUT ADMISSIBILITY OF ADHOC RELIEF ALLOWANCE 2018 ON PROMOTION OR UPGRADATION TO HIGHER SCALES AFTER 30.06.2017.

August 13, 2018
Government of Punjab, Finance Department, Deputy Sectretary (PC) issued a clarification letter regarding admissibility of adhoc relief allowance 2018 on promotion / upgradation to higher scales after 30.06.2017 vide No.FD.PC 2-1/2016(279/18) dated 02.08.2018:
I am directed to refer to the subject cited above and to stated that a question has arisen about admissibility of Adhoc Relief Allowance 2016 @ 10% of existing basic pay of Basic Pay Scales 2016 to those who have been promoted / upgraded to higher scales after 30.06.2017.

Punjab Government allowed an Adhoc Relief Allowance 2016 @ 10% of the running basic pay of BPS-2016 to the civil servants of the Punjab Government including contract employees employed against civil posts in Basic Pay Scales on standard terms and conditions of contract appointment with effect from 01.07.2018.

An anomalous situation emerged between Government servants already in service and new entrants appointed subsequently. On on e hand, the employees who were already in Government service and were promoted / upgraded after 30.06.2017 continued to draw the allowance at the level of its admissibility as on 30.06.2017 on the basis of their basic pay in lower scale even if it was lower than the minimum of pay scales against which the employees were promoted to higher pay scales of placed in the higher pay scales through upgradation. on the other hand, the new entrants who came into service after 30.06.2017 was allowed Adhoc Relief Allowance 2016 @ 10% of the minimum of relevant pay scales of Basic Pay Scales 2016 vide Paras7(ii) of the notification dated 14.07.2017. 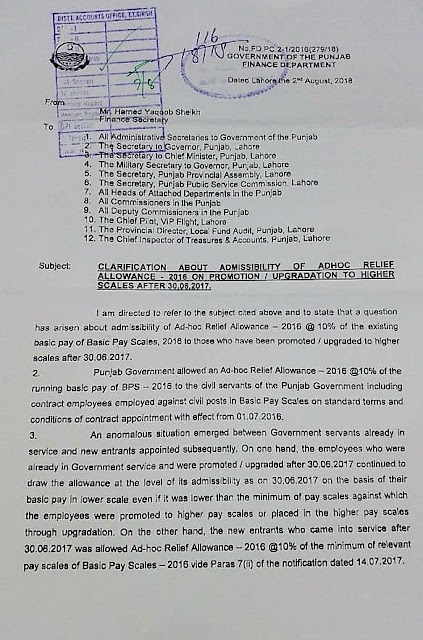 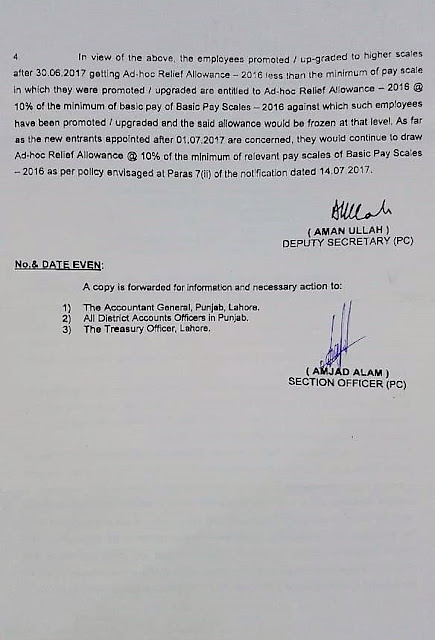