CONSTITUTION OF COMMITTEE TO REVIEW THE PAY PACKAGE OF PUNJAB POLICE

May 19, 2019
Principal Secretary to Chief Minister Punjab issued a notification regarding Constitution of Committee to Review the Pay Package of Punjab Police.

Chief Minister Punjab has been please to constitute the following Committee on the subject matter:
The terms of Reference (TORs) of the Committee shall be as under:

i. To compare and evaluate Special Pay Package / Incentive introduced by the Government of Punjab for Punjab Police in 2009 and its diminishing effects with the passage of time.

ii. To examine / review the following proposals of Punjab Police as compared to the improved pay packages of employees of Civil Secretariat / Other Departments etc;
iii. To harmonize the pay package of all formations of Police Department including Punjab Highway Patrol and Punjab Police Traffic Warden Service.

The Committee shall meet immediately and furnish its recommendations to the Chief Minister within fortnightly positively. 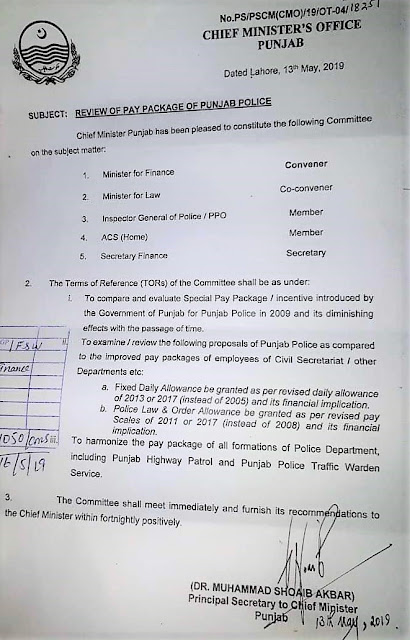