The undersigned is directed to refer to Establishment Division's Communication F.No. 5(11) 2019-MSW-V, dated 4" June, 2020 on the above subject and to state that the 34 Meeting of the Cabinet Implementation Committee (CIC) for Re-organizing the Federal Government was held on 07 May, 2020 and agenda item "Abolition of posts in the Federal Government and Freezing of Recruitment of Support Staff' was discussed Following decision was taken:-

It has been stated that number of the employees in Federal Government has increased consistently during the last decade and due to this the annual salary bill has increased by three folds and pension bill is becoming unmanageable. Further, the structure of the Federal Government is lopsided with 95% employees in Grades 1-16 consuming 85% of the salary bill.
It may be added here that it has already been desired by the Prime Minister's Office and World Bank that governance apparatus may be right sized and smart and unnecessary expenditure be curtailed
The matter has been examined in Finance Division, which is of the opinion that the decision of abolition of vacant posts in BS-1-16 is a new policy recommendation in terms of Rule 16 () of Rules of Business, 1973, the recommendations of Cabinet Implementation Committee are required to be submitted to the Federal Cabinet for approval, after seeking permission of the Prime Minister. The recommendations unless approved by the Federal Cabinet shall have no legal backing. Further, the implementation on the subject matter should be in accordance with the Rule 24 and Rule 11 of Rules of Business 1973. According to the Rules of Business 1973, the relevant Division to comply/execute the decision is the Establishment Division.
Establishment Division is, therefore, requested to proceed further in the matter.
This issues with the approval of Finance Secretary.
Withdrawal of Notification of Abolition of Posts
The undersigned is directed to refer to Establishment Division's O.M. of even number dated 076) July 2020 on the subject noted above and to state that the above referred O.M. is withdrawn ab-initio. 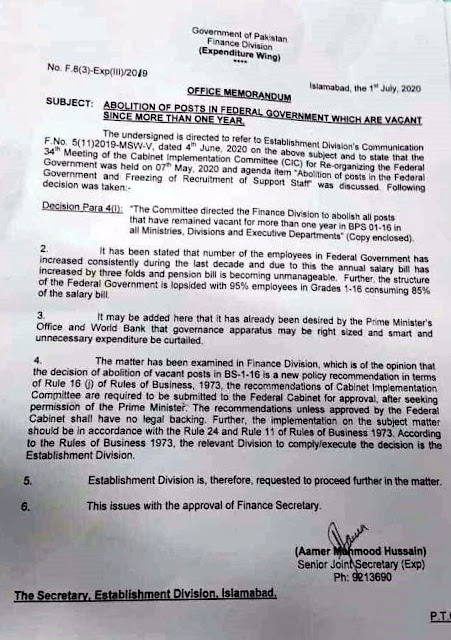 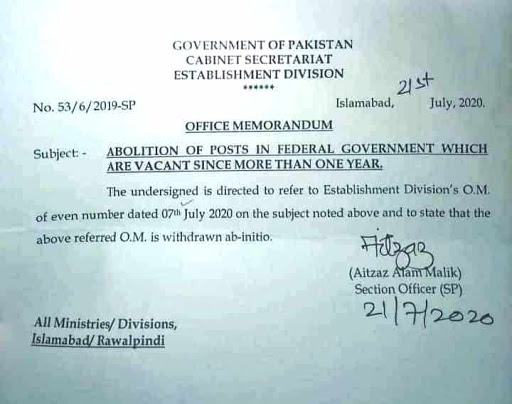