On a query from Finance Department, a question has arisen whether project employees may be given the additional charge of a post.

The case has been examined in the Regulations Wing. S&GAD and it is observed that project employees are appointed for time bound activity of the project and are paid out of the development funds. Their situation is not much different from work charged employees because their remuneration is charged to the development scheme, irrespective of the fact whether the posts have been sanctioned in BS Regime by the Finance Department. Hence their position needs to be treated as such and not equal to the contract employees serving against a substantive post. There has been a practice of giving Additional Charge of the substantive posts or the positions in other project to such project employees. The same needs to be discouraged on the following grounds:

In view of the above, the Administrative Departments are requested that additional charge of a post may not be entrusted to any project employee for smooth functioning of official business.

This issues with the approval of Chief Secretary, Punjab. 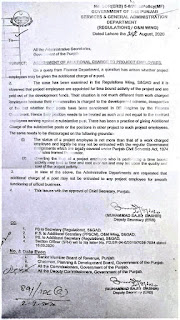