DECISION REGARDING REGULARIZATION W.E.F EFFECT FROM THE DATE OF JOINING OF INITIAL APPOINTMENT BY SECRETARY SCHOOL EDUCATION

SO(SE-I)1-184/2013(P): WHEREAS, Deputy Secretary (Welfare) to Additional Chief Secretary forwarded the various application the officers of BS-17 & BS-18(Male & Female) whose services were regularized under the Punjab Regularization of Service Act, 2018 & Punjab Regularization of Service (Amendment) Act, 2019 dated 13.12.2019 and directed the department to take the necessary action under the rules/ policy.

2. AND WHEREAS, the appeals, received from the Additional Chief Secretary, are bifurcated into two categories. The First category comprises the appeals of the officers (Male & Female) whose services have been regularized under the Punjab Regularization of Service Act, 2018 & the Punjab Regularization of Service (Amendment) Act, 2019 dated 13.12.2019. They claim that their services should have been regularized with effect from the date of joining of initial appointment instead of with immediate effect. The second category consists of the appeals of the officers whose services are regularized in the light the Act ibid but not along with their batch-mates due to late reporting of the cases from lower formation or due to the deficiencies. The appeals related to the first category envisage the following grounds:

3. WHEREAS, the Section Officer (ERB), Regulations Wing of S&GAD vide letter No.so (ERB)5-23/2018/SED dated 02.08.2018 has advised that under the existing policy regarding regularization of contract service as well as Punjab Regularization of Service Act, 2018, regularization is “with immediate effect". In the light of above said advice, the department had already made the decision on the issue similar in nature, vide No SO (SE-I) 1-123/2018, dated 29.09.2018, in a writ petition No.205685/2018 in the Hon'ble Lahore High Court, Lahore filed by Mr. Muhammad Shafique Slo Ch. Muhammad Bakhsh, Senior Headmaster (BS-18), Government Farooqi Islamia High School, Baghbanpura, Lahore along with 68 others and their representation was rejected by the department.

4. WHEREAS, The stance adopted in the appeals related to the second category is that the orders of regularization of officers of BS-17 & BS-18(Male & Female) were not issued along with their batch-mates. The delay in regularization order caused the loss of seniority and annual increment which was due on 1st December.

5. WHEREAS, the factual position under the rules/ policy is that the seniority of the officers recruited through PPSC, is not affected whether the officers are regularized earlier or later. The PPSC generates the inter se seniority of the officers on the basis of merit that remains intact. The operative part of the Civil servants (seniority) rules, 1993 is reproduced as under: “Seniority on initial appointment.—(1) Persons initially appointed on the recommendations of the selection authority through an earlier open advertisement shall rank senior to those appointed through a subsequent open advertisement. (2) If two or more persons are recommended in open advertisement by the selection authority their inter se seniority shall be determined in order of merit assigned by the selection authority.”

6. WHEREAS, the annual increment is concerned, the facts are as follows:

7. WHEREAS, all the cases, regarding regularization of a particular subject/category, are not reported at the same time & date. Consequently, the officers of the same batch/ category are regularized on different dates and with immediate effect as per the Act ibid. School Education Department regularized the services of the contract employees with immediate effect instead of their initial date of appointment. During this period from the date of their contract appointment to the date of their regularization, the School Education Department has promoted 530 officers/teachers of the same cadre posts from BS-17 to BS-18. If the contract employees will be regularized from the date of their initial appointment, seniority of permanent officers will be affected accordingly.

8. NOW, THEREFORE, on the perusal of the above-mentioned facts and after detailed discussion, deliberation and mutual consensus, the appeals of the officers are hereby rejected being devoid of merit in the light of the Punjab Regularization of Service Act 2018 (XV of 2018) dated 30.04.2018, the Punjab Regularization of Service (Amendment) Act, 2019 dated 13.12.2019 and the advice from Regulations Wing of S&GAD vide letter No.SO (ERB)5 23/2018/SED dated 02.08.2018. 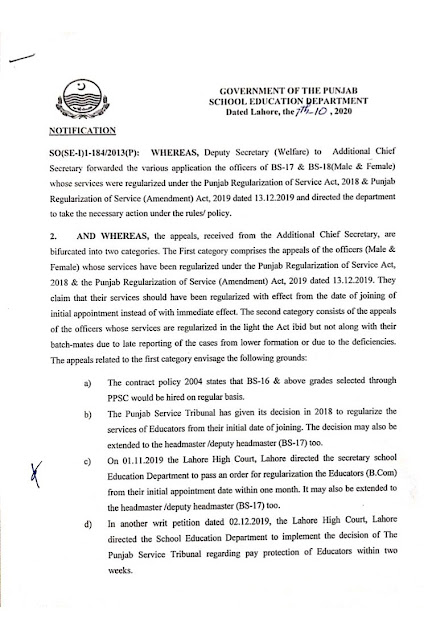 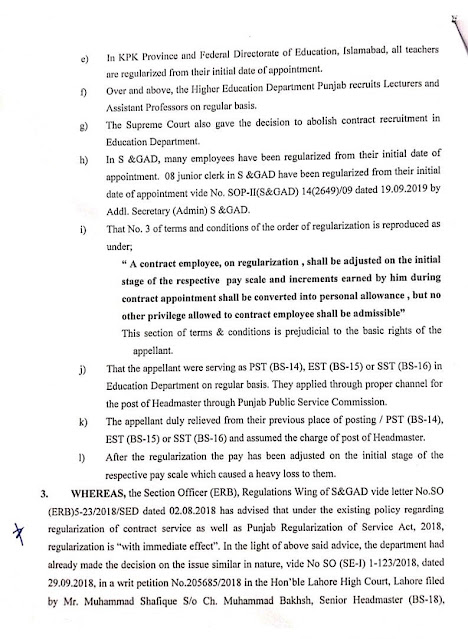 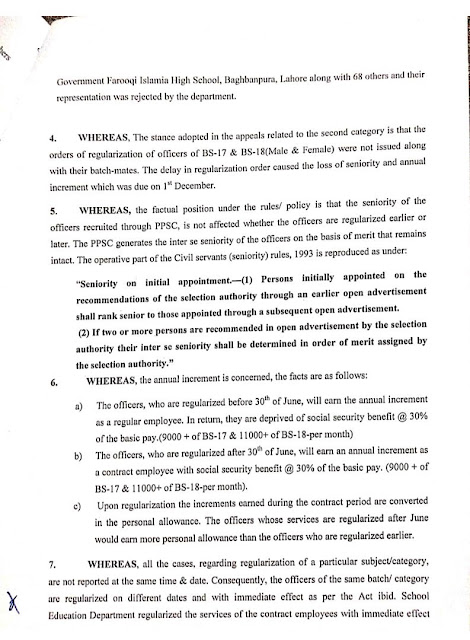