Government of the Punjab, Higher Education Department issued a clarification regarding regularization of contract employees from BS-16 and above.

The case was forwarded to Regulation Wing of S&GAD for advice in the matter. Regulation Wing, S&GAD vide letter No. SO(ERB)5-5/2019/HED dated 18.08.2020 advised that the autonomous bodies do not fall under the umbrella of the Punjab Regularization of Service Act, 2018, however, the autonomous bodies may adopt the act ibid after getting approval of their competent fora ie., Boards / syndicates, while giving due regard to the provisions of their service rules / regulations.

Foregoing in view, the Autonomous Bodies may regularize the services of their contract employees including BS-16 & above, in the light of Section 5 of the Punjab Regularization of Service Act, 2018 (xv of 2018), provided, the Boards have adopted the Act by placing the same in BOG meeting. Hence, the appointing authority is Competent to regularize the services of contract employees by adopting the procedure prescribed in Section 5 of the Act, ibid. 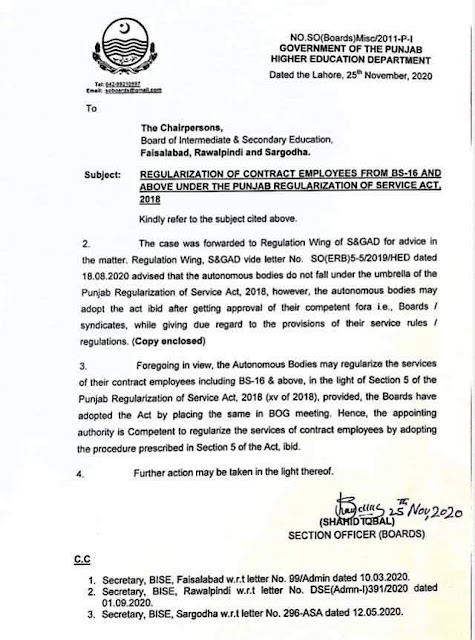