CLARIFICATION REGARDING DISBURSEMENT OF MEDICAL ALLOWANCE TO THE ELEMENTARY SCHOOL TEACHERS

December 12, 2020
Deputy Accountant General, Punjab issued a clarification regarding disbursement of medical allowance to the Elementary School Teachers upgraded from BS-15 to BS-16 as on 01.01.2018.
Attention is invited towards Government of the Punjab, Finance Department circular letter No.FD.PC.39-14/77(Pt-IV)APCA/2008(Provl) dated 11.02.2016, which stipulates as under:
"If any employee is promoted / up-graded after 30.06.2015, he would be entitled to Medical Allowance @ 15% of his Basic Pay as on 30.06.2010 subject to 15% of the minimum of pay scales of Basic Pay Scales, 2008 against which such employees have been promoted / up-graded. He will be further entitled to 25% increase in the amount of Medical Allowance w.e.f. 01.07.2015 in pursuance of Pay Revision Rules 2015 and shall stand frozen at the same level. However, the Medical Allowance in no case should be less than Rs.1,500/- per month". 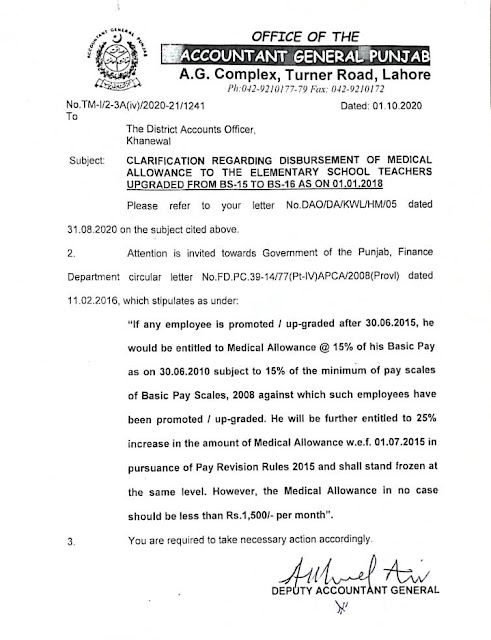