NO EXPENDITURE SHALL BE APPROVED BY THE ACCOUNTING OFFICES INCLUDING SALARY

The Public Finance Management Act 2019 has been enacted to strengthen management of public finances in Federal Government. Section 22 of the Act provides that custody and operation of Federal Consolidated Fund and Public Account of Federation shall vest in the Finance Division under supervision of Federal Government. Furthermore, under Section 23 of the Act, no authority shall incur or commit any expenditure from Federal Consolidated Fund and Public Account until sanctioned by a competent authority and funds have been provided for a financial year through the budgetary mechanism.

As per Section 5(b) of the Controller General of Accounts (Appointment, Functions and Powers) Ordinance 2001, it is the function of the CGA to authorize payments and withdrawals from the Consolidated Fund and Public Accounts of Federal and Provincial Governments against approved budgetary provisions after pre-audited checks as the Auditor General may, from time to time, prescribe.

The Office of the AGPR has intimated that some Government Departments/Offices have kept insufficient budget in relevant heads of account to meet requirements of Employee Related Expenses (ERE) for the current financial year. This practice may result into excess expenditures, over and above the budgetary allocation, thus, adversely affecting the prudent budget and cash management of Federal Government.

It may be recalled that Finance Division has provided one line budget to the PAOs for the CFY, with the responsibility to keep availability of funds in all heads of accounts, particularly ERE. While the PFM Act provides for delegation of financial powers to the PAOs, it also balances authority with responsibility for financial propriety as per applicable rules and regulations. Finance Division has been emphasizing time and again that the first charge on the allocated budget is to meet the ERE. The provisions of the Act and rules lay down procedures for reappropriation of funds and supplementary grants. The PAOs have to regularly monitor the expenditures in various heads of accounts and take appropriate measures to keep availability of funds during a financial year.

Finance Division, in consultation with the AGPR, has prepared a brief strategy to maintain financial propriety in order to ensure that all expenditures are made within the allocated and released budget. There shall not be any expenditure approved by the Accounting Offices without availability of funds through budgetary mechanism. Following strategy shall be followed:

All the PAOs and Accounting Offices of the Federal Government are requested to fully comply with the provisions of the PFM Act and the above strategy for better financial and budgetary management during the financial year. 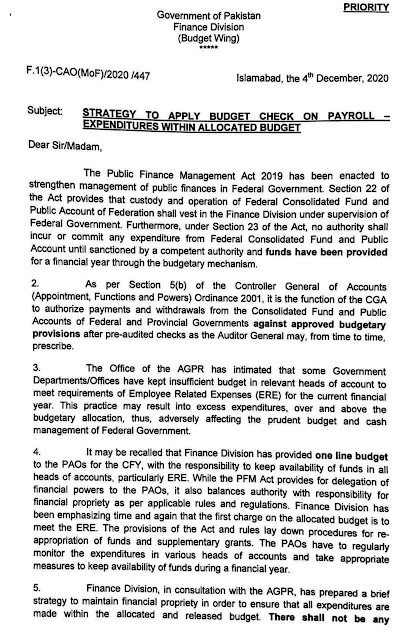 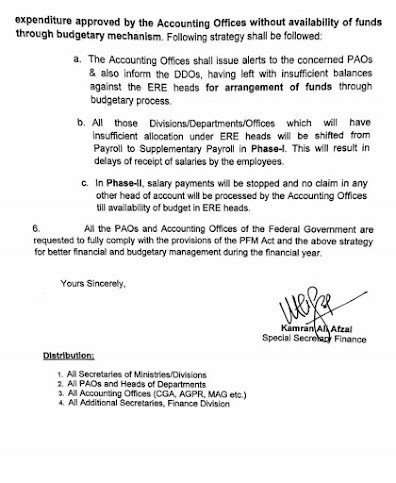