The above officers will hold the same posts but with a changed designation of next higher post in line by prefixing the word "Additional".

Before release of arrears, concerned HR and Accounts offices should re-confirm the date of admissibility w.e.t. taking over charge as SE/Director (BPS-19) in pursuance of relevant PEPCO promotion order. In case of any discrepancy, relevant case be referred to this office for necessary modification.

The said officers shall remain under the administrative control as per their original structural hierarchy.

This up-gradation shall not entitle them to claim regular promotion in the upgraded scale.

If any concealment / misrepresentation or forging of the information relating 36 the eligibility for this up-gradation is revealed out at any later stage, then up-gradation orders will be liable for ab-initio cancellation besides recovery of pecuniary benefits. 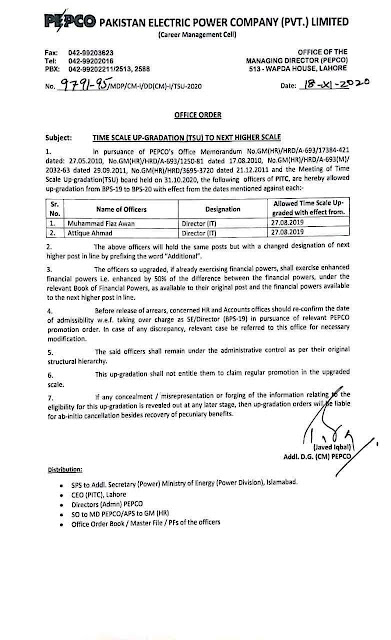