Government of Pakistan, Finance Department (Regulation Wing) furnished a summary for the cabinet for grant of disparity reduction allowance to the employees of the federal government.

A structure of Unified Pay Scales was introduced in 1972 for all government servants. However, since 2009, disparities in salaries have occurred because employees of various government establishments were allowed 100 percent to 300 percent of the basic pay as allowance, in addition to the usual pay of the scale (list at Annexure-I).

The Government did not allow any increase in salaries of government servants in the budget for FY 2020-21. At the same time the tax slabs for the salaried class were revised. This lax revision, coupled with inflation, has had an adverse impact on government servants, whose take-home salaries were actually reduced even in nominal terms.

The matter was reviewed in the meeting of the Secretaries Committee wherein it was concluded that the salary structure of the Federal Secretariat has become a major impediment to attracting competent officers to work in Federal Ministries. Officers now prefer working for provincial governments, where salaries have been raised significantly. The Secretaries' Committee was of the opinion that the present pay structure is not tenable and s Federal Secretariat require an upward revision in order to motivate and retain officers in the Federal Secretariat. Furthermore, there have been protracted and widespread protests by clerical staff against the disparity in salaries.

Civilian employees who have never been granted an allowance equal to 100 percent of the basic pay work out to be 296,470, out of a total 623,215 employees, or almost 48 percent. The Federal Cabinet had also noted this disparity during the review of the budget strategy for FY 2020-21 and directed harmonization of Salaries. A Pay and Pension Commission has been constituted and is formulating recommendations for adoption w.e.f. 1st July 2021

However, in view of the reasons explained above, some form of immediate relief is required for those government servants who are disadvantaged vis-a-vis those who are receiving higher remuneration. It is, therefore, proposed that till such time that a new salary structure is adopted on the recommendations of the Pay and Pension Commission, a 'Disparity Reduction Allowance of 25 percent of the basic pay of BS-2017 may be allowed w.e.f 1st March 2021 to those civil employees in BS-1 to BS-19 of the Federal Government (including employees of the Federal Secretariat and attached departments) who have never been allowed additional salary equal to or more than 100 percent of the basic pay (whether frozen or otherwise) or performance allowance.

The Disparity Reduction Allowance will be granted on standard conditions (Annexure II); it will not be admissible to employees of the organizations mentioned in Annexure I; and will be frozen at the level drawn on 1st March 2021. The financial impact for this allowance would be approximately Rs. 21 billion per annum. Any issues arising out of the implementation of disparity reduction allowance will be resolved by a committee to be notified by the Finance Division. Moreover, Finance Division may recommend to provincial governments to consider adopting the proposed disparity allowance for their employees, to be funded from provinces' own resources.

It is further submitted for information of the Cabinet that posts in BS-1 to BS-16 will be upgraded w.e.f. 19 March 2021, and timescale promotions will be considered for adoption in the Budget for FY 2021-22, on the analogy of the Government of Khyber Pakhtunkhwa. Furthermore, various adhoc relief allowances will be considered for merger in the basic pay scales w.e.f. 14 July 2021

Approval of the Cabinet is solicited to the proposals at paras 5 and 6 of the summary in terms of rule 16() of the Rules of Business, 1973.

The Minister for Finance and Revenue has seen and authorized the submission of the summary to the Cabinet.

2. Federal Board of Revenue 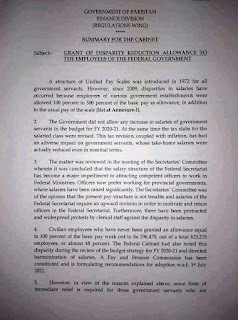 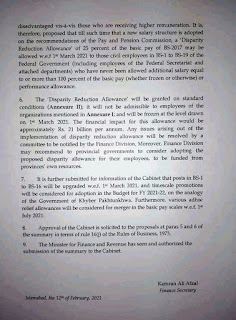 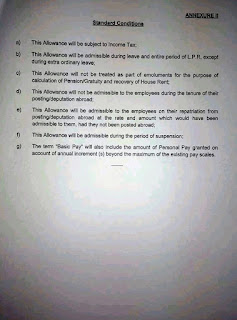 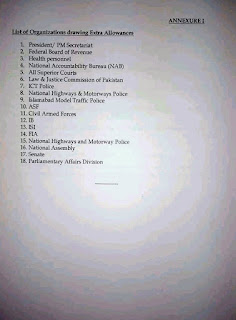